Permit delay costs have increased by more than $9,000 since BIAW released its first report on the cost of permit delays in Washington last fall. That’s thanks to escalating home mortgage interest rates and rising home prices.

When BIAW first released its study in November 2021, the association found the average permit delay in Washington was 6.5 months. These delays cost homebuyers an additional average of $22,347 in holding costs. Those holding costs include things like: financing payments, property taxes, insurance, gas, electric and water fees, trash collection and more.

The association calculated the holding costs by multiplying the average delay in months by the average monthly mortgage payment for a median-priced new home in Washington. In its first study, that calculation included the average interest rate at the time (3.6 %). 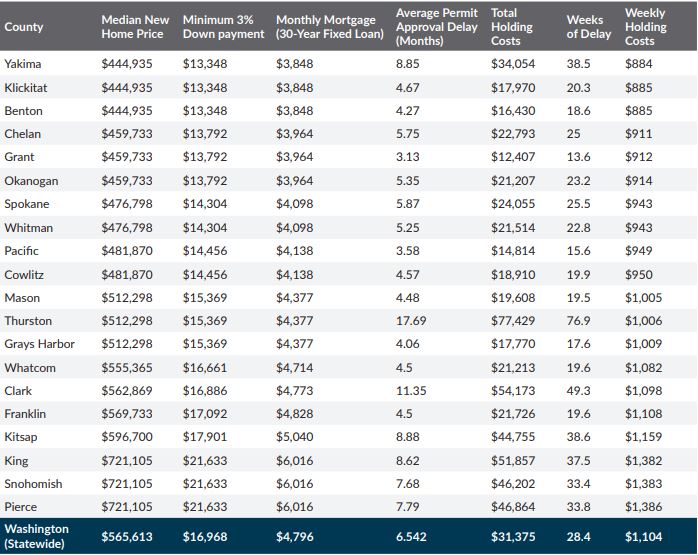 Multitude of reasons for delays

BIAW has identified a number of understandable reasons for the delays, including staff turnover, varying levels of experience, language barriers and process pinch points. They’ve also identified areas for improvement, including:

When every $1,000 added to the price of a new home excludes 2,200 families from the opportunity to purchase a new home, every dollar counts.

That average of $31,375 in added permit delay costs translates to 69,075 families priced out of homeownership.

Permit reform on the agenda

BIAW will once again prioritize reducing permit timeline delays as part of its 2023 legislative agenda.

The government affairs team is working on holding jurisdictions more accountable for accurately reporting their permit timelines, adding clarity to the definition of a complete permit application and finding creative new ways for applicants to seek relief if jurisdictions fail to meet their statutory timeline for permits.

We’ve expanded our network by working with the Department of Commerce and county and city governments to get a head start on this issue. BIAW will also introduce a bill requiring jurisdictions to expedite and streamline the permit process by allowing architects and engineers to provide their professional stamp of approval on projects. After all, they are certified and insured professionals trained to follow the existing codes and laws in the first place.

Join BIAW’s Tuesday morning calls to receive updates on our priorities, opportunities to testify before the Legislature and other ways you can help by engaging with your elected officials. To sign up for these calls, please email josiec@biaw.com.

You can also receive calls to action by signing up for our text alerts by texting “BIAW” to 50457.

Thank you so much for your hard work to help keep housing more affordable for Washington families.