OLYMPIA… Nationally home prices have jumped 20 percent in the last year—and here in Washington state, the median price of a new home has increased 8.4 percent from $522,023 in 2021 to $565,613 in 2022, according to the latest report by the National Association of Home Builders.

At that price, the Building Industry Association of Washington calculates that households need $130,409 in income just to qualify for a mortgage. At a time when Washington’s median household income is $73,775, 76 percent of households are unable to afford new homes.

“When we look at the housing affordability crisis in our state and nation, it’s easy to point to recent factors like supply chain disruptions or lumber prices,” said BIAW President Joseph Irons of Irons Brothers Construction. “But the sad truth is there simply aren’t enough new homes available for people to purchase. That, coupled with decades of increasing layers of regulation and zoning restrictions, has slowly and steadily created the crisis we’re in today.”

NAHB recently reported that 82 percent of Americans in a recent nationwide poll agreed that policymakers “should factor in housing affordability when considering new legislation and regulations.” In Washington, that number grew to 84 percent.

During the 2022 legislative session, BIAW worked to stave off bills that would have resulted in higher home prices for those wanting to buy their first homes.

“Every $1,000 increase in the cost of building a new home now prices more than 2,182 people out of the market in Washington,” he said. “We’re grateful to those who stood with us, both Republicans and Democrats, to make home ownership a priority.”

NAHB reports home ownership is the primary driver of household wealth. Across all racial and ethnic demographics, people’s homes were their largest asset.

Yet NAHB reports the homeownership rate in Washington is only 63 percent. People across the state and nation agree housing affordability is a problem—79 percent of Americans and 85 percent of Washington residents—according to the NAHB poll.

“The Building Industry Association of Washington looks forward to continuing to work with state lawmakers as well as local government leaders to provide guidance to address these problems,” Irons said. “We believe everyone deserves to be able to achieve the American dream of owning a home.”

Priced out data by major metropolitan areas in Washington* 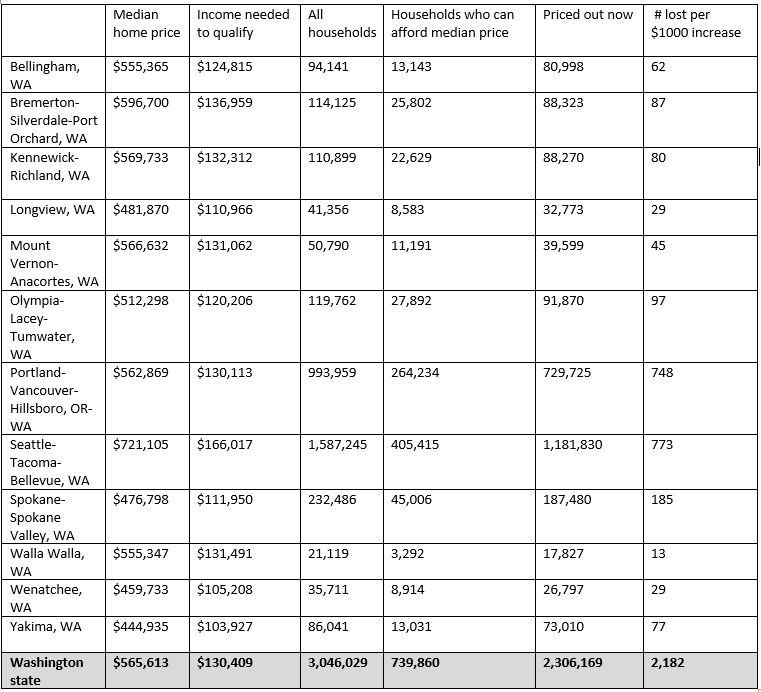