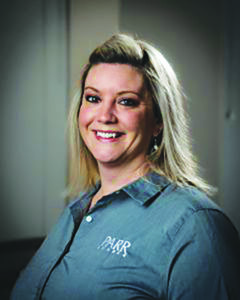 Since joining the Spokane Home Builders Association (SHBA), associate member Jessie Zundel has found a new community that has brought her a boost in confidence. A contractor sales representative for Parr Lumber in Spokane, Zundel joined SHBA after attending an event in 2019. She now serves as SHBA’s second vice president, the highest-ranking leadership role an associate member can achieve.

“I have found a new group of people I can call peers— people who would recommend you to business prospects because you would, in return,” Zundel said.

Jessie Zundel began working for Parr Lumber seven years ago, initially as a window purchaser for the Spokane and Pasco locations. In her current contractor sales role, she is regularly in direct contact with local contractors, overseeing several large accounts. Her involvement with SHBA has helped her open up and become more comfortable when reaching out to make new connections.

“Being involved with SHBA has helped me grow personally regarding my confidence when it comes to speaking to new members or even a crowd,” she said.

Before working in the building industry, Zundel served as a medical records technician in the U.S. Air Force. During her service, she completed two back-to-back overseas tours before returning home to work as a pharmacy technician. After a 12-year career, she left the military and began her path in the homebuilding industry.

“I absolutely love my job,” she said. “I love the feeling I get when I see a completed house that I had a huge part in, from the foundation to the interior. I love the gratitude customers have when I help with the smallest details. It really is a rewarding job.”

In 2022, BIAW’s Associate Advisory Council honored Jessie Zundel with an Associate Appreciation Award. SHBA Executive Officer Joel White said he nominated Zundel for the award for the value she brings to their association through her continued willingness to offer support and be involved.

“Jessie is a driver who makes sure SHBA programs are focused on providing value to members in a professional manner,” White said. “She knows the needs of our core membership and is always willing to engage members.”

Voted as one of the area’s top workplaces in The Oregonian’s 2022 survey, Parr Lumber is a family-owned company with a mission of “providing legendary service through teamwork.” Founded in 1930 and headquartered in Hillsboro, Ore., they now have 23 locations throughout Washington and Oregon. Learn more at Parr.com.

*Original article was written by Hannah Cassara, Content Specialist, and featured in the Jan. issue of Building Insight magazine.